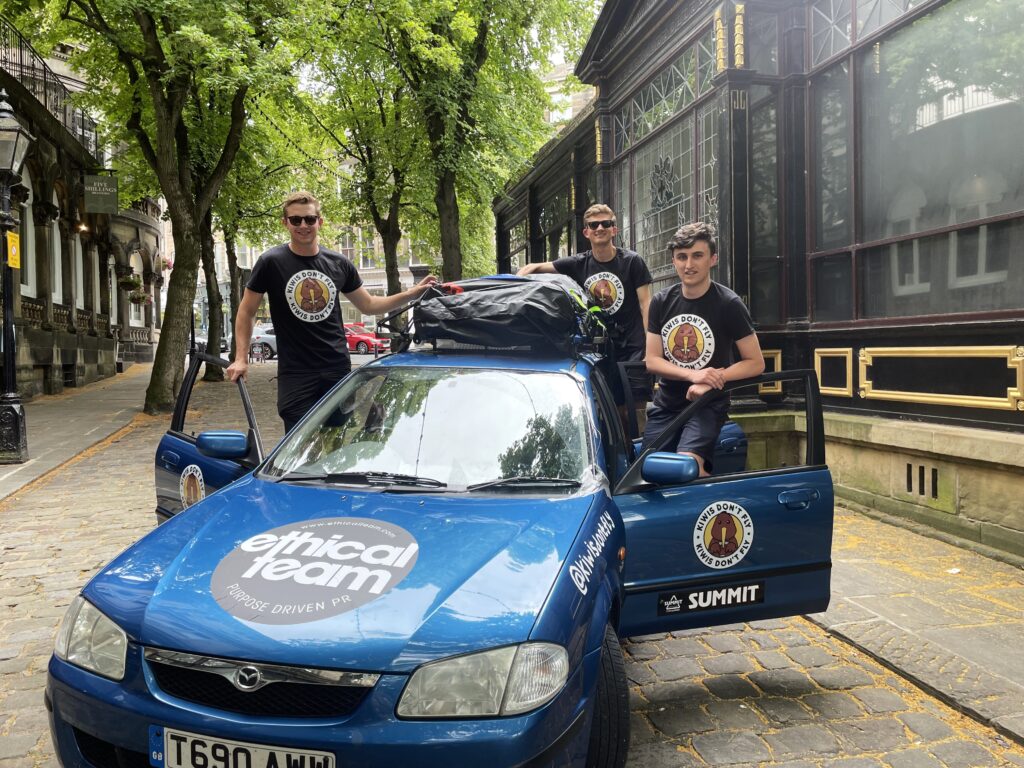 The car race of a lifetime for charity started this week from the top of Scotland, heading south en route to cross the channel at Dover. Three friends from New Zealand in their early 20’s begin an epic overland journey to India as part of the new “Mongol Rally: Poles of inconvenience”, aka “the greatest motoring adventure on the planet.” The rules are simple; the car must be less than 1.3 Litres, unequivocally small, basic, and something you would hope to see your granny driving to the supermarket in as opposed to circumnavigating two continents. All while raising as much money as possible for the Ukraine Humanitarian Appeal.

The ‘Kiwis Don’t Fly Rally Team’ is made up of Daniel Patton (22), Joe Fisher (23), & Callum Kitson (22). The fundraisers with UK roots have a strong passion for adventure, challenges, and travel. They hope the power of friendship will be enough to get them through the rally in one piece and get their inappropriately small car to multiple hard-to-reach locations in Europe and Western Asia.

The rally’s first stage will take the team from John o’ Groats at the top of Scotland down to Georgia, where they will compete against other rally teams in “The Adventurists Poles of Inconvenience Rally.” After this, they will navigate south from Georgia through Azerbaijan, Iran, and Pakistan to reach their destination at the bottom of India. The journey will see them faced with challenges including numerous deserts, travelling high up into the Himalayas, and navigating the chaotic roads of the world’s busiest cities.

Iain Patton, Director, Ethical Team, one of the team’s sponsors, commented, “It’s incredible how the plight of Ukraine has garnered support from young people all around the world. It’s inspiring how ‘Kiwis Don’t Fly’ want to do everything in their power to make a difference and show solidarity with Ukrainians in such difficult times”.

The friends will raise money for the Disaster Emergency Committee’s (DEC) Ukraine Appeal. The Disasters Emergency Committee combines 15 leading charities to support humanitarian needs from the war in Ukraine. They are now working to support over 18 million people affected by the Ukraine conflict with water, food, shelter, and essential supplies.

You can help support them and their chosen charity by donating here.