Supermarkets contribute a minimum of 59 billion pieces of single-use plastic to our plastic pollution problem each year. Greenpeace investigated which supermarkets are working towards reducing their impact and which ones are not.

Supermarkets churn out a colossal amount of single-use plastic packaging. Based on supermarkets’ own data, we now know it’s at least 59 billion pieces of plastic every year. So clearly if we are going to solve the plastic pollution problem we need supermarkets to change how they package their products. 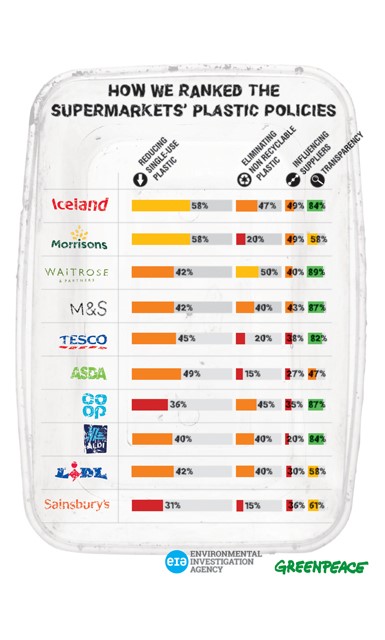 Plastic is a near-indestructible material, and too often it ends up in our environment because there’s just too much of it being produced and used for single-use packaging in the first place. As packaging, plastic has a short working life, but as pollution it can last for hundreds of years, doing lethal harm to our sea life along the way. Now we know what it’s doing to our oceans, it simply has to go.

Their league table reflects whether the top ten supermarkets are embracing this challenge, as well as their commitments to engage with their suppliers on plastic reduction – like using their buying power to push big consumer brands to reduce their plastic footprint – and transparency. What they found is supermarkets aren’t stepping up to the plate when it comes to reducing plastic, and they aren’t moving fast enough to remove unnecessary and non-recyclable plastic either:

FIVE supermarkets have no specific targets to reduce plastic packaging
Despite their huge combined plastic footprint, Aldi, Co-op, Sainsbury’s, Tesco and Waitrose have no specific reduction targets for plastic packaging. And of the supermarkets that do have targets, most are moving at such a slow pace (just 5% per year) that it would take them 20 years to completely rid their shelves of throwaway plastic.

Only FOUR supermarkets offer customers some options to use refillable containers
The most effective way to reduce reliance on single-use packaging is to normalise refill or reuse options – and it’s an approach that both cuts plastic pollution and helps conserve precious habitats like forests. This means embracing approaches like enabling customers to bring their own containers to food counters, and offering more loose or bulk produce. Their recent polling showed 86% shoppers support the idea of supermarkets moving towards using more refillable and reusable packaging. Morrisons is showing the most promise on refillables so far, but there is huge scope – and an urgent need – for supermarkets to scale up on this.

Over THREE billion bags
The ten leading supermarkets are also producing 1.1 billion single-use bags, almost one billion bags for life and 1.2 billion plastic produce bags for fruit and vegetables. This is needless plastic and also something customers can opt out of. To encourage this, and carry forward the success of the 5p plastic carrier bag charge, supermarkets need to remove unnecessary plastic and make using no plastic the easy option by helping customers move to reusable bags.

Twenty twenty TWO
2022 is the earliest target a supermarket has set to eliminate the plastic in their stores that is not widely and easily recyclable. We think it should happen without delay and without exception as alternatives already exist. Given their current pledges to act on this problem plastic, most supermarkets will still be filled with plastics you can’t even recycle for the next seven years. They are even promoting this as a ‘flagship commitment’ to tackling plastic. But recycling alone won’t solve the ocean plastic crisis; supermarkets must focus on reduction, and remove the most problematic types of plastic as a first step.

ONE thing that’s clear
UK supermarkets have a long way to go, but a year ago these scores would have been even lower – the action they’re taking together is working. Whether you’re one of the 740,000 people who has called on supermarkets to ditch throwaway plastic, exposed #pointlesspackaging and tagged your supermarket online, written to a supermarket CEO, or left unwanted plastic packaging at the till; supermarkets are really starting to feel the pressure. Plastic packaging has now become a red button issue for retailer reputations. The scores are disappointing, but the race is on. Supermarkets can still choose whether to lead the solution or stay part of the problem.