Ethical Team had one of its busiest periods supporting the global Rainforest Alliance pitching its announcements to UK media outlets from August through to November 2019 and sadly this story is still continuing.

What is the latest news/figures about deforestation in Brazil?

November 2017, Brazil released its annual deforestation figures. Between August 2017 and July 2018, 7,900sq km were deforested, according to preliminary statistics from the environment ministry based on satellite monitoring. This is a 13.7% rise. We must ensure that the rates stay as low as they have been in the past decade and prevent a further increase.

The Amazon rainforest is burning record numbers of fires this year, and now smoke from the expansive flames has been captured on both NASA and NOAA satellites from space. According to the National Institute for Space Research (INPE) satellite data showed an 83 per cent increase compared to the same period in 2018. The space agency reports its satellite data has detected more than 72,000 fires since January 2019.

Satellite images revealed 9,507 new forest fires have burned in the country since Thursday.

Most of the recent blazes were located in the Amazon basin, which is home to the world’s largest tropical forest seen as vital to countering global warming.

Why do forests like the Amazon need to be protected?

Protecting the world’s forests ensures they can continue to provide essential functions aside from climate stability, including producing oxygen, filtering water, and supporting biodiversity. Not only do all the world’s people depend on forests to provide clean air, clean water, and medicines; 1.6 billion people rely on them directly for their livelihoods.

Forests are also the most viable option to protect the world against climate change. Recent research has shown that natural climate solutions, including reforestation and agroforestry, are essential to fight climate change. Natural climate solutions can deliver up to 37% of the climate mitigation needed between now and 2030 to stabilize global warming below 2°C in a cost-effective manner. 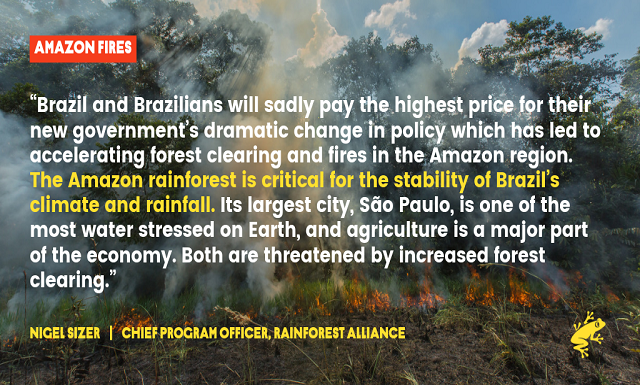